The Suite inexacte en homologie singulière (1968-2005) is a monster belonging to a race which was considered extinct: a 83 meter long drawing, made with Indian ink during forty years, which remained invisible since its first exhibition in 1971 in the Museum of Modern Art of the city of Paris. It is whispered that the work was developing in silence, some asserted that it was impossible because drawing was supposedly an unproductive, obsolete activity: its author could only be a kind of Penelope dismantling at night her day’s work. But since the monster resurfaced, very officially, at the Maison Rouge in 2010, no doubt is left: I can testify to the existence of the Suite inexacte en homologie singulière.

Since 1968, Jean de Maximy, a virtuoso of the Rotring pen and black ink, has been acting as a Sphinx, developing his explosive device: it unreels, unrolls, calculates, meditates on a hundred sheets of the same format (50 x 65 cm) attached alongside each other. He weaves, knits, braids, crosses, reworks, from black to white, grays out and clears up, ties and unties his linear drawing without any previous plan or narrative goal. In mathematics, series are sequences of patterns; a particular case is the one of an “exact sequence in singular homology”. Maximy’s drawings do not require any exactness. The title was suggested by a friend of his, a theorist in nuclear and particle physics. But interestingly, one notes eventually that this inexactness inaccuracy does tell something. 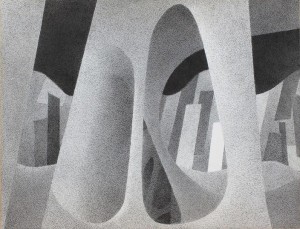 This paper reptile has a rather abstract and geometrical beginning, with phases where one recognizes 70’s-style environments very psychedelic, even a “sea, sex and sun” ambience, or a cosmic register (some think of “2001, a Space Odyssey”. Indeed, Maximy explains that he uses various cinema techniques: close-up, direct and reverse angle, dolly shot…). 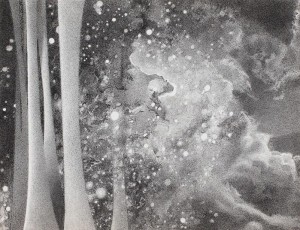 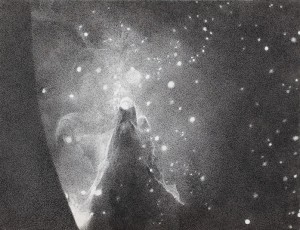 Form live, evolve, metamorphose unceasingly, creating a visual music, a kinetic labyrinth that the onlookers triggers at each ambulation. The work leads in 2005 to a return to landscape and nature…and a human form appears… 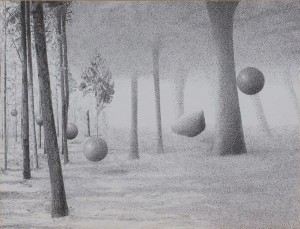 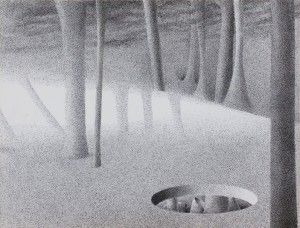 A unique case, an unparalleled work, this Continuation proves the ambition of a life but also constancy, the coherence of a singular artist, outside of the market… This optical caterpillar deserves a suitable cocoon where it can be shown entirely.
In the meantime Patagonia being a land of legend, its Imaginary Museum is happy to host some sections of this art dream turned real….