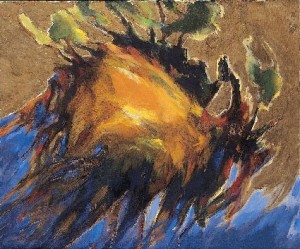 Floating islands are well known, but Aude de Kerros has discovered the fulgurating island, carried by the floods like a marine comet. 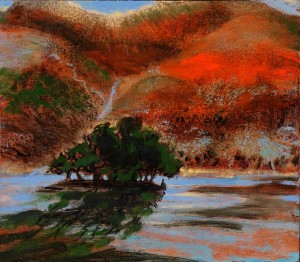 The island is a boat. The tree consists of a mast and its sails: the island is taking in the wind like a windward island sailing on towards dawn or sunset. Prophets and meditating mystics are aboard: as in a well-known proverb, “there are the dead, the living. and those at sea”… 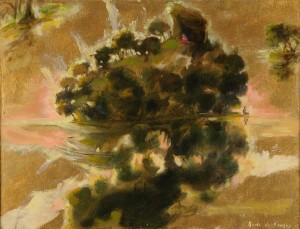 Of these noble watchmen assumedly shrouded in togas, one will not read what they write or consult/vaticinators. The Kerros archipelago have few animals and few symbolic objects that would provide a cue. One will not know the fruit of these thoughts born under the blazing terebinths; only their aura is depicted: they radiate these pensive captains, tiny commanders overs a fistful of land left to drift. Or maybe it is the opposite – a motionless island in a river or estuary flowing by.

The canvas is a crucible which mixes earth, fire, water, and air – the 4 elements, plus plants and human, this thinking reed; it wakes up to its own genesis by contemplating the elementary vicissitudes: a foliage is charring, lower down the islanders are joyful like will-o’-the-wisps. A sizeable tree/fan brushes the air, scratches the liquid sky transmuted into a pond.

Baptism of fire, alchemy of hearts in a metamorphosis carried by the river of life. The dimmed clearness of an oil lamp. On the surface slip the islands, such of the clay vessels in a glassy sea which flames. Painting burns without consuming. Burning bush.

Oil painting is a chrismation, an unction; as such, it requires a small quantity of the dissolver collected from the tall terebinths. Pictorial art is like the biblical lamp wasted by the unwise, and maintained with enthusiasm by the wise ones. One does not light a lamp to put it under the bushel. However, since the middle of the 20th century, in France, a cultural clergy preaches us the opposite.

Returning to the sources. André Chastel suggested that painting in France originated on the canopies of the cathedrals. Aude de Kerros thus dipped her brushes again in the fused substance of stained glasses, enamels, the irisations of elytrons and other incandescences.