In 2009, Christine Sourgins, wrote to the Consul General to apply for oneiric asylum.

Before I submit to you my request, I feel I have to expose a few facts which may give some background.

At age six, I reached up for altitude, setting up in the attic a sackcloth bivouac to sleep on the slate rooftop under the stars, in the light of the attic window. There, dusting off the objects that had been stored away, I foresaw a vocation as an archeologist… Unfortunately, my grandfather, searching for his potato bags; found my digging field and I had to leave. having taken refuge in the wood stack at the far end of the garden, between the logs and metal sheets, I would remain for hours watching, my sketchbook in hand, drawing clouds. I disturbed a staunch grass snake and had to retreat. Although arts- and literature-minded, I was enrolled in a maths section, and had to fend against logarithms, vectorial homothecies and algebraic adders – or vipers !. Then (to make it short) I was expelled from the religious instruction class and the mandolin class (not to mention the rest, but I will remain discrete).

I survived but I did not become an archeologist. I live in a concrete building, with no attic or garden, and the clouds now prefer being photographed than painted. I thought that I was safe in the middle of my library, where eventually I reigned on a palace of shelves – my paper kingdom. But as an archeologist at heart, I keep every lucky find, being unable to discard anything, hence the paper clutter which is to personal papers what the rabble is to a people. Moreover, as a fair-level pupil of modern maths, I am unable to calculate the rupture weight of a rack.
The rack in the entrance of the apartment has just collapsed behind the main door. The paper clutter hold sway and has erected barricades, exiling me into the street, locking me out miserably.

Mister Consul General, could you grant me oneiric asylum?

With my best regards, 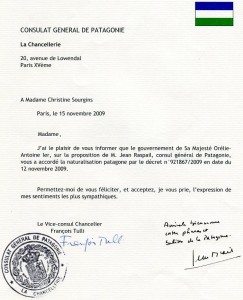 His Majesty Orélie-Antoine 1st granted her the Patagonian nationality and named her “Advisor for the lighthouses and beacons of Patagonia” (with reference to the poem by Baudelaire, “The Lighthouses” which pays homage to the great painters.).