Sergio Bello is an “eco-illuminator” who does not illuminate a spiritual text or a learned treaty but a few pages of the Book of nature, in the ‘Amazonia’ section. The recurring composition, a rectangle containing a circle, hints to the Brazilian flag, Bello’s country of origin. But it also evokes an optical device, as if, in the middle of the page, we were under a gaze; whoever has stayed for some time in a forest knows this strange impression to be observed by an invisible being… 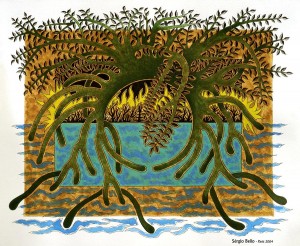 But the vegetal element, which had a minor, sometimes decorative role in historical illumination, becomes the main subject here, and occupies all the space swarming with foliage, barbs, veins… Sometimes a genuine tree leaf is there like a discrete relic: the marginal has become central. Bello performs an inversion: nature is too often discredited, viewed as a food bank to be robbed; the term “forestry exploitation” feels like plundering. The predatory sights must give way to focus and contemplation. 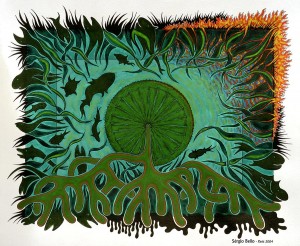 Thus an eco- illumination places us in an astounding low angle of view, while on the right an oil well is ablaze: the central jellyfish, is seen from underneath, while fish are cruising on the surface.

For some ancient Greeks, the jellyfish is a metaphor of lotus with a fatal glance. It is time to change our way of looking at our environment.
A tragedy is taking place in the pine groves, mangroves, bamboos bushes, sea strands – everywhere fire is shouldering, and bursts like an grenade of ember; sparks punctuate the pages as did, formerly, the minium of illuminators.
Here and there, burned wood, saw teeth, erasures on nature. The forest stands up and shakes, bushy and disheveled, protests with all its plants, darts its spikes and spines; it is constantly outgrowing the frame chosen by the artist: its vitality is wounded but enduring. 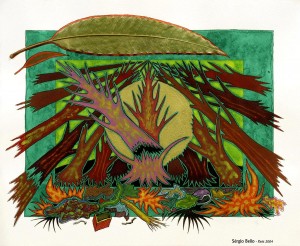 Animals participate in this threatened nature. Their bodies follow its curvy lines as the macaw which flies away between sea and sky. Even the snake leaves a few feathers (of course, as in the Amerindian myth, it has feathers).
In the middle of the general clamor, howling lips deliver at the same time the cry of the victim, the Indian, and the cry of the artist. 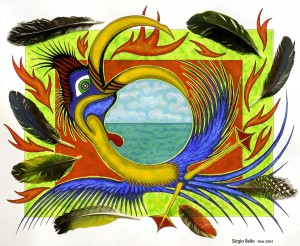 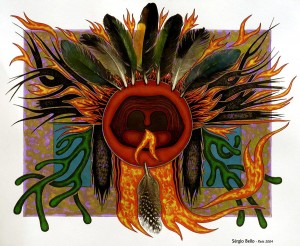 « Cry of the Amerindian: cry of the world »

Meticulous like his predecessors, Sergio Bello does not use parchment but a paper album, opting for acrylic resin for its solidity and the vigor of tones. A “handmade” production by this Indian of the city, who lives on the Parisian heights, perched in a forest of books and house plants.
Printing and engraving have displaced illumination; already the infernal mechanism has been triggered whereby an invention could succeed only by eradicating the previous one, who become an object of contempt – as if inventing the train would decree it was useless to walk. Because Marcel Duchamp invented the objet trouvé, the new prescription was that painting is worthless and meaningless. In that outlook, true Culture (as Grace) does not remove Nature but perfects it Conceptual art is exalted, to the point that, any other approach should be despised. The painters would belong definitively to the past, considered incompetents to deal with “the problems of our time”, they would have nothing more to say: ecology, oikos + logia, this science of the habitat, would then be totally disregarded. Because there exists a “Financial art”, any non-speculative artist would be eradicated. This state of mind has been drying out hearts, tetanizing brains, paralyzed hands, and exhausted the planet. More than ever, the defense of natural and the defense of cultural diversity go hand in hand.