Brigitte warned you: finding her workshop is not easy. The district is modern, dating from the 70’s. You have to leave the street and walk up a staircase to a terrace; if you see a dojo above the hardware shop Bricorama you are on track: the fact that warlike sculptures made of terra cotta, steel rods, bolts and cables, are in ambush near a temple of do-it-yourself and a martial arts gym proves that Brigitte Terzieff has a flair for location.
Here is a maze of small cubes, each of which is an artist’s workshop: if you spot the door with the right color, you will be allowed to walk down a spiraling staircase and, at the end of the labyrinth, you will reach to the holy of holies: an L-shaped room around a pocket-size garden, inserted in the Parisian ground. a drawn Minotaur in the middle of its cave confronts you with its gaze. A horn prongs out on the right, surrounded by guy wires. Is Brigitte a new Ariadne? With her long fair hair on a lean silhouette, this woman, so linear, has the flexibility and lightness of a liana – one wonders how, frail as she is, she can have given birth to such giants… 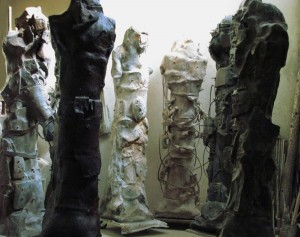 And what of this escort of protective genies? Is it a Praetorian guard? Petrified ancestors? Primitive samurais in sandstone scales? Or some of these Chinese soldiers in terra cotta armor, accompanying their sovereign in the other world? They are undoubtedly immemorial: one cannot put a name on these armors, but they constantly remind us of famous heroes, some racy plenipotentiaries. In Macbeth a forest was moving; here, rooted at the bottom of a well of light, these telluric sculptures are the uplift of the earth itself. These bodies with metal skeletons, dressed in plates… are they tectonic knights ? These elementary powers, draped in humus, dumb, mesmerize the watcher.
At last I recognize them, these Giants, these savages! They are antique Patagonians! But, as I am only moderately bold, I would be wary about them; a small head deploying antennas. seems more comely These steel stems vibrate under the fingers, musical notes are produced, proving by the ear the accuracy of the lines and the balance of the masses. 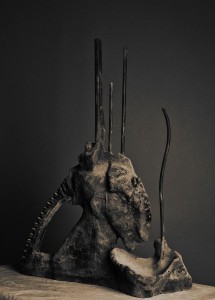 A cat leaps, as if to say: “you saw the queen and her paladins, but I am the great chamberlain”. He carries out his inspection: these clay colossi are permanent and prestigious guests but we are only visitors.
In the small patio invaded by a bay-tree, filled with vegetable exuberance, nature is reappropriating the place. The workshop turns into a vivarium for creatures of another era, another reign, another planet who knows?
Like an anthropologist confronted with an unknown tribe, one asks the artist: how many are these Titans? Nineteen. She would like to have twenty of them. Why twenty? Are these works gigantic parts of chess-board, out to conquer some strategic positions in the course of collections and exhibitions? As there are knights, infantrymen and squires or other pieces of a table game, pawns and tokens, these Hercules made of earth and steel have a continuation: busts then helmet-covered heads. 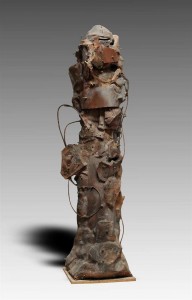 At the entrance of the workshop is the luminous (chess)square of a mirror; in front of the adjacent wall is a panel, a puzzle of black textures. According to brushstrokes, this Harlequin skin associates the skin of a lizard to that of a cobra, an alligator or an elephant….Brigitte dreamed of a collaboration with the Musée des Arts Premiers (Museum of Native Arts, in Paris). The answer had just arrived: four insipid lines to tell the sculptor to desist. The Quai Branly museum scorns these Western artists who work, in their own way, on a set of themes common to primeval or primitive art (“art premier”). What of the dialog of cultures? Brigitte speaks about Africa, evokes Jean Rouch and his film Les Maîtres Fous (“The Mad Masters”), with its ceremony of possession where African convene the spirit of the dominators… Shaking, panting, the seizure of trance. She is filled with enthusiasm, and as she gestures, one notes the trace of an assiduous practice of the dance. The wild ritual filmed by Rouch ends in the sacrifice and the devoration of a dog (to Brigitte does not adhere).

The great chamberlain passes by again quite discreetly, the Siamese rolls his shoulders: he also disapproves.

The cat is one of the few felidae that know the limits of the return of the wild. Brigitte introduces him: his name is Scarabée (scarab). He disappears in the settings, to live his animal life. Daylight gives way to twilight on the Patagonians. Brigitte has turned on a small lamp, and tightly gathered around its halo, like explorers around a campfire, we discuss this strange region called Art. As Brigitte brings beverages of her own making, a downpour bursts. Outside, the garden has the silhouette of a virgin forest, the heavy shower is thumping rhythm the glass panes of the roof. On those port-holes of sort, the rain’s tom-tom playing is part in some ritual which would greet the return of the Giants to the kingdom of the shades. At this point, you realize that the orange juice mix has a taste of pastis, that the large mirror is horizontal and not vertical, and that the cat has the name of an insect – but that all this is perfectly normal.

The animal then emerges from the night where the Patagonians are dozing… Scarabée meows. Our audience is over.