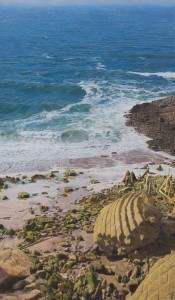 A Big Blue, a painting, whose long verticality physically grips the visitor: “story-within-a-story” to which Boris Lejeune invites to experience the viewer. But a pictorial “story-within-a-story”, very different from those that are cherished by the conceptualists: there is no paint exposing the wall color. Above a beach, at first glance fairly mundane, the eye is first attracted by the intensity of ultramarine which occupies a significant part of the painting.

Yves Klein also played with the intensity of the blue. But after this gong of color, after the blue of soul, there is nothing. The monochromes deplete quickly in the shock they impose. Here, blue is not just painted; each stroke, each wave was thought, felt, lived. Tremor, inner life of the colour, is such as suddenly you realize that the extreme precision of the painting created an incarnation of the expression “Beyond the sea”.

Boris Lejeune paints the wave when it withdraws from shore to sea, and as the viewer contemplates, he is startled: he feels that the retreat of waves is marking the path, as if a deep marine respiration waited for him to communicate its breath.

Here we are surprised at being sucked into a painted swell. Especially at first, there is nothing to see. A photographer would not risk a shot, nothing anecdotal takes place on this literally abstract shore, “derived from”, as it seems to spring from the light. The shadows are not empty, they are not holes but they exude a range of subtle colors, such as harmonics of a sound. This smooth paint does not treat substance and light as a duality. The lack of subjectivity in the brush (which was so fashionable) does not prevent depicted objects to have weight, tactile qualities: thus, in the foreground, green kelp gently bummers pebbles by the tide. Their gentle roundness opposes cut stones of the wall gilded by sun. The dry objects contrast with the wet. Further, the pink sand wriggles under the soles of the eye, the froth foams against a natural wall of dark granite.

The strength of rocks opposes the wall built by man, collapsed. The sea has broken up a pan, giving it the resemblance of a striated conch. Enough to make us meditate on the ability of nature to repatriate within it human labor? Painting of vanity, like “Gone with the ocean”? Unlikely.

For a Russian artist who fled the Soviet regime, the collapse of a wall can be an accurate historical reference. So plea for a world without frontiers? Is that why the barrier of horizon is absent from the painting?

This large patch of yellow wall, next to the disjointed planks of a handrail discreetly evokes all the buildings built on the sand and of which the Evangelion predicted the debacle. Isn’t the challenge of life to live in the world? One thinks of Chinese painting rolls suggesting spirituality, through the flow of water and men, between earth and sky. Asians know to be careful, as Boris Lejeune: finally a painter who ends his paintings! But the world is both finite and infinite, that the Chinese rolls do not say. Here the masterpiece stops when the horizon will emerge. The stratosphere does not matter to us, it is uninhabitable and we are in the world, but we’re not the world, our sky is that state of weightlessness which immerses the viewer in embracing the curvature of its momentum, stones, beach, and ocean always renewed, the Creation.